Successive Irish governments have talked about “initiatives” to encourage “egovernment”. Some of the work they’ve done has been pretty good, but a lot of it wasn’t exactly stellar.

So it’s great to see that a totally independent, citizen volunteer project like Kildare Street has not only managed to give us, the people, access to Dail (parliament) transcripts, but also allows to pass comments, get alerts and so much more.

Kildare Street is the brainchild of John Handelaar and is based on similar project in the UK.

John’s announcement explains it all:

Up until this morning TDs made 249,489 speeches, and asked 160,503 questions which received written responses.

On average, TDs are producing 507 speeches and 326 written answers per sitting day.

And Handelaar’s site has now made all of that content accessible and searchable.

Now that is cool!

While it may not be the most visually attractive website, IrishBlogs.ie wins me over as it’s so useful.

IrishBlogs.ie is a blog aggregator ie. it collects the blog posts from multiple blogs and bloggers, which in this instance are all Irish or related to Ireland.

As you explore the site you can see that it groups posts on particular subjects etc.,

A handy resource, especially if you want to find out what Irish bloggers are saying about you or your business

On a related note.. the Irish Blog Awards are now accepting nominations

I really hate all the media talk about egovernment and how governments across Europe are working hard to bring information to us, their citizens.

However, one project that is truly useful is the one run by the Irish Citizens Information Board.

The site is not particularly visual or anything like that, but it is literally crammed with useful information for people living and working in Ireland (or planning on doing so).

If you want to know what your rights or entitlements are then this is the site for you. 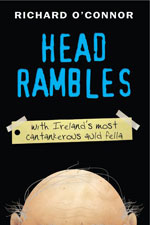 Headrambles is one of those blogs that brings a smile to your face.

To be perfectly honest on more than one occasion its author’s ramblings have had me in fits of laughter – the kind of laughter that doesn’t mix too well with a cup of coffee (my monitor can attest to this!)

“Grandad” who pens the random rants over on Headrambles is one of Ireland’s older bloggers. He’s also one of the funniest, so I’d heartily recommend him to anyone with a sense of humour (NB: if you’re a politically correct nut you may not approve!)

You may love it, you may hate it, but you cannot deny that Boards.ie is one of the busiest and most popular sites in Ireland.

With over 400 separate forums covering every imaginable topic the site attracts thousands of visitors every day and clocks up several million page impressions per month.

The site has been running since 1998 and has one just about every award going.